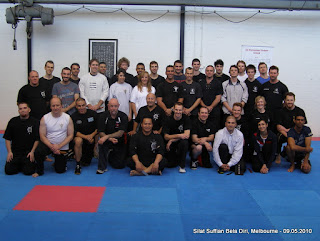 Chris Warner sits front row far left
Anyone who has participated in any instructional sessions under Maul Mornie, knows how he emphasises the basic interception drills every time at the start of every session to build correct muscle memory and proper mind-set when faced with a knife threat.
Below is the experience of Chris Warner, an Australian who resides in Adelaide. He regularly participates in the handful of SSBD training in Melbourne directly under Maul Mornie.

It happend at Dandenong, Melbourne in 2011.
Melbourne 6 months ago, I was attending an appointment at one of the local government offices.

On walking into this office and beginning to walk to the line, I noticed an agitated large Sikh man with a young boy I took to be his son. On appraisal I noticed an imprint of something stuffed into the back of his belt and covered by a shirt.

His phone rang and he got even more agitated, yelling into the phone, this brought the attention of another Sikh man, the security guard at this office.

As the security approached, he too noticed the imprint of what appeared to be a knife, he stopped and made a quick phone call, to what turns out was the local police station, not even 2 blocks away.

The security guard approached the man and started pointing at the bulge and talking in Punjabi, this made our agitated man, even more so. I got nervous, made sure to look around well and note face.

I took two steps slowly backwards seeing that things were about to get violent. I wanted no part of this.

With no sign of it coming, the knife was out from his waistband and he was lunging at the security guard who was standing directly infront of me, he dropped and side stepped out of the way leaving the knife heading directly towards my heart.

For the sake of reference I am only 5 feet 8 inches tall, and at the time weighed 110 kg. He was considerably larger and heavier than me towering over me at about 6 foot 5 inches.

In a moment of terror the blade caught me over the heart, puncturing my chest shallowly as I moved off centre. I barely remember moving or most of what I did. That came later in court on the security footage from multiple angles.

What I did was something I had been training in since I first met Maul Mornie. A basic stab defence drill that is part of the SSBD core mechanics. This core movement I practised incessantly with my wife, working it and 2 variations.

When the police entered they saw him lunge and had to watch what happened, I was unaware of this until I was behind the attacking man, stomping through his knee and driving him down into the floor screaming and holding his crippled shoulder and arm. The encounter was finished by a dropping elbow on the top of his head.

This all took less than 3 minutes from the phone call made to the police to me being arrested.

My response apparently was less than a second from him being full physically able to him being crippled.

What was happening in my mind at the time?
Terror and the thought “I am going to die!", this thought triggers a state of mind in which I become hyper aggressive and my subconscious takes control of my muscle memory.

From the youngest age, I was told, NEVER allow yourself to die, the first death is in your mind. This I am told is a God complex or superman complex, one that allows you to never give in, never give up and strive at all costs to survive. My training mirrors this. I train the muscle memory, then the scenario. I strive for awareness, not at the cost of my relaxation or health, but to the point of being aware of what is happening around me, people’s voices, tones and what they are saying, body language.

I take this all in and let my instincts guide me mostly, seeking to avoid trouble rather than walk through it blindly.

My training is based around responding to fear and understanding the world around me. Sometimes I may fail, this time with the help of Maul Mornie's training I survived, without it, the story could have ended differently.
Thank you Chris Warner for sharing your experience. We wish no one would ever be faced with this situation, most of the times we prepare for things that will never happen, but when it does, even just once in our life time we will be ready.
Chris attends SSBD training regularly organized by John Scheiven in Melbourne, Australia under direct instructions of Maul Mornie.

Maul Mornie would like to clearly point out that it was just 0.1% SSBD and 99.9% courage and determination from Chris Warner himself.

For more information on future worldwide events contact the events organizers CLICK HERE or alternatively go to WWW.YOUTUBE.COM/MAUL565 for video clips of SSBD.